Dr. hc. Randolph Delano Muller, who is Chairman of the Mena Muria Human Rights Foundation and President of the Republic of the Moluccas in Exile is one of the founders of this Foundation, is an international businessman in gem stones based in Switzerland. 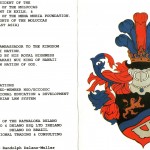 In his youth in Zeist, the Netherlands, he was well known because of his interest in youth organizations. In the 70′s and 80′s he had businesses in Brazil and Switzerland and had connections in Hawaii. Since 1998 he also represents the Hawaiian Kingdom and independence as Ambassador/diplomat in the United Nations in New York. And he  represents the Roma people  in the United Nations. Dr. Muller can’t stand human injustice and will fight against it.

Mr. Bart Bernard is a Netherlands-based barrister who has represented International Educational Development for nearly 10 years. He is a founder and Vice Chairman of the Mena Muria Human Rights Foundation and Vice President of the Republic of the Moluccas in Exile and has presented many individual and group cases to the UN special procedures. See website of Association of Humanitarian Lawyers.

Millions of Moluccan people still live on the islands that make uo the Moluccas.  According to numerous impartial observers the Indonesian government has continuously committed crimes against the Moluccan people and nation, including denial and human rights, aggression and violence against the general population.